FAREWELL TO MY SOUTHWEST HOME 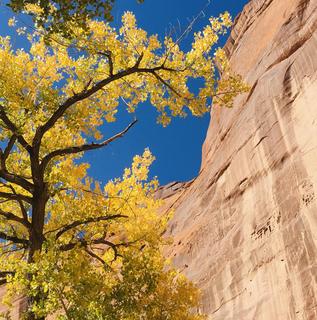 In the early 1980s I was homeless. I didn't think of it that way because to me, at the time, being homeless meant living on the street, which I never did. I was a lost soul, living for days or weeks in other people's homes. At one point I spent three weeks on the UC Berkeley campus, participating in a nutrition study, which gave me room and board and a stipend. From there I moved into an SRO, a Single Room Occupancy, also known as a "residence hotel." I worked at the desk there for my room and board and created an editing and typing business for spare change. I operated a switchboard that had survived the 1906 San Francisco earthquake and met women who had been shoved out of mental institutions by the Reagan policy. I got to know women from China who were studying for a six-week stint at the Van Ness Business College. I talked every day to a woman who had made the hotel her home since 1936. There was a chiropractor who had lived there for fifteen years. There were transients––tourists from Germany, Ireland and Jamaica, a young lesbian couple coming to the Promised Land from South Dakota, staying in the hotel while they sought jobs and someplace permanent.

In October of that year, I decided to return to New Mexico and the larger Southwest. I could hardly wait. One night, shortly before leaving, I wrote a poem I called "nightsong" about my joy to be coming home. Yet, I would still be homeless for many more months. It was New Mexico that was home and the Navajo Nation that was Home-Not-Home. I was going back to both.

While I was packing to leave New Mexico for Iowa, which I will do a week from now, I found that poem. I didn't know I still had it. So, although I'm leaving my New Mexico home now, it seems fitting to share the poem that tells of my deep connection here.

past midnight     on the narrow bed

playing cards til 4am

dust clouds down the road

The poem is beautiful. I'm glad you found and shared it.

Thank you, Linden. Such a simple word but means a lot from you!

Thank you, Cara. I'm glad I found it and could share it too--almost 40 years later!

Our current story is similar to your older one...packing up our house and closing this week. We will also be "homeless" except for the gracious generosity of friends. I appreciate your sentiments.

Thank you, Mary. And also moving to be near children and, in your case grandchildren. May your move and the transition time go smoothly and offer some adventure, too!

I got a lump in my throat as I read this, Anna. I trust that NM will always be a home for you in one sense. We will always warmly welcome you back here.

Thank you Catherine for already welcoming me back. Home. And for the feels.

Ah... So much there. Blessings on this new chapter 💜💜

Thank you, Marianne! Yes, a lot to miss, but also a lot I'm looking forward to, especially being a short walk from my daughter. I know you get that!

Anna, I love the poem. I wish you well in your move. I definitely still want to keep in contact and keep reading your blogs. Peace, Blessings and Love🙏❤️

Thank you, Cheryl! We're so fortunate that staying in touch is easy, no matter where we are on the planet. I've been off my blog for a while, but I expect to pick up again when I'm more or less settled in Elk Horn. Peace and love to you!

Beautiful Anna, love your poem and your connection with the land :-) Safe travel ❤️

Thank you, Tina! Yes, it is the land I will miss so very much. Thank you for safe travels wishes.

Interesting to know that you worked on a switchboard that survived the 1906 San Francisco earthquake! I can tell you're a writer by the details you share. Plus, it touched me because I've worked on a switchboard--it paid my bills. I'm glad you're moving to Iowa where your daughter lives. Home is where our loved ones live.

Thanks for your recognition and sharing an experience we’ve had in common. I agree about home!

Thank you for reminding me of what to appreciate about New Mexico, a home I have never felt at home in.. This touches me.

I had no idea, Diane, that you haven’t felt at home here. That has to be hard, as long as you’ve been here. I hope that can change for you.

Anna, I love your poem "Coming Home" I can relate to it in so many different ways. There are many times you are coming home from something that affects you deeply and you return.

Thank you, Cheryl. I agree, there are many experiences of coming home in our lifetimes.

Thank you so much, Sharon! New Mexico is definitely the place of my roots, but I have moved so much that it's hard for me to think of forever anymore! Much love to you!