OF SERENDIPITY AND MEANING 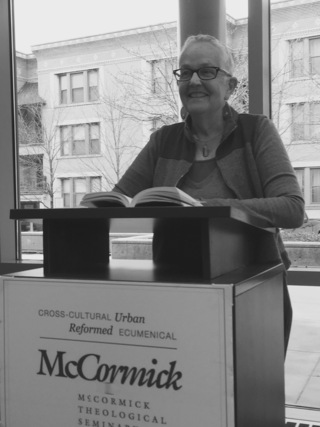 Reading at McCormick Seminary
I’m standing on an underground platform in a city I’ve never been to—Philadelphia—and I come upon a woman holding a train schedule. I ask her if I’m in the right place for the Paoli line. “Yes,” she says, then asks if I’m in Philly for the Occupational Therapy Association Conference. No, I was there to be interviewed for a documentary film about LGBTQ elders who were impacted by their faith communities when they came out. I tell her I’m on a book tour, and she wants to know what the book is about. My gaydar is buzzing. I’m pretty sure she’ll be receptive. In fact, as I give her the elevator version, she taps her chest, indicating that my story is, in some way, her story, then says that she’s come to no resolution with her religious past in the Church of God in Christ in Tulsa—possibly even more extreme than my own upbringing. “I think you might relate to the book,” and I offer her my card. It’s at this point that we exchange coordinates. Delighted by the surprise that we both live in Albuquerque, we agree to meet up when I get back from touring. If this sounds like a dream, it’s not. It’s the kind of serendipity that has happened again and again on this adventure.

I knew I had embarked on a  Read More
10 Comments

Love these stories! Can't wait to read about Pullman. Eden has fallen for Georgia O'Keefe since doing a report about her in March, and we resolved to go to the museum next time we're in NM.

So glad you're enjoying them, Megan! I'm inviting myself along to the Georgia O'Keeffe. It's the perfect size for young people and just about anyone. Have you thought of taking her to the O'Keeffe childhood home, which I believe is in IL?

Thank you for this wonderful post, Anna. Serendipity indeed! You are planting so many seeds, sure to bear fruit far into the future in ways we cannot even imagine.
I want to mention a new book in case you are not aware of it (2016) - UNCLOBBER: Rethinking Our Misuse of The Bible on Homosexuality - by Colby Martin. Personal story combined with thoughtful Scriptural study makes it a powerful book.
Hoping to connect in person soon.

Thanks so much, Kathy, for your comment about seed-planting and the reference to a book that's new to me. Would love to see you in person soon, too.

Anna, it was an honor to have you in our home to speak to 22 of our friends. Your journey touched all of them and your gracious manner endeared you to each of them. God bless you and your mission.

Thank you so much, Art & Judy for your warm & gracious hospitality, your encouragement, & your work as allies.

What a pleasure to have you stay with us! You are doing important and tender work. When you do this, I firmly believe a path is made for you to do the work. I have read many accounts of others on personal quests and similar accounts of angels popping up along the path to pave the way. I hope you are back to the Midwest again some time and you are always welcome to stay here.

I love your use of the word "tender," Cara. Thank you. I had not thought of angels, but I love that too. You are one of them. I do hope to come back to the Midwest and am still thinking about September.

What wonderful times, and so many in Michigan!! That's hopeful to me, as originally a Michigander, or rather a 'troll'!! (Never heard that before. Fun.)
Nor have I read so many Dutch names in one narrative since I moved away.(also fun!)
Got to ask if one GR establishment might be New Holland Brewing? We were there at Christmas; I have a nephew working there. Great space.
Very impressive mid-west trip, Anna! Thank you.

Thanks, Fonda. I know what you mean about all those Dutch names--it tickles me when I ride the train through GR, Hudsonville, Holland, etc, to see all the Dutch names on businesses. There is something about our roots, about appreciating them and everyone else's.